A future and a hope.

Well, this is a hard blog to write, but I figured it’s the best way to let everyone know and to avoid confrontation.  I won’t lie, that’s my goal.

I guess I’ll just get right down to it.  I miscarried this week.  I went to have a dating ultrasound on Tuesday night to confirm my due date of April 20th.  The doctor thought it was strange that the baby measured 2 weeks smaller than he or she was supposed to.  I was supposed to be 11 weeks.  So after 2 hours of waiting I had the ultrasound and it was strange because they wouldn’t show me the screen or let Brandon in the room.  They told me that something wasn’t routine and they needed a doctor to read the results.  But all the doctors were in the OR and they sent me home.  They called at 10:30 that night and told me to go to my normal doctor the next day.  So, full of hope, Brandon and I went, excited to see our little baby, since the mean lady last night wouldn’t even show us a picture.  Turns out, the baby had not grown in a couple weeks and there was no longer a heart beat.

I’ll spare you the details on how my heart hurts, as I’m sure you can imagine it does.  But I’ll leave you with one thought of comfort.  I have this Bible verse stuck on my fridge: 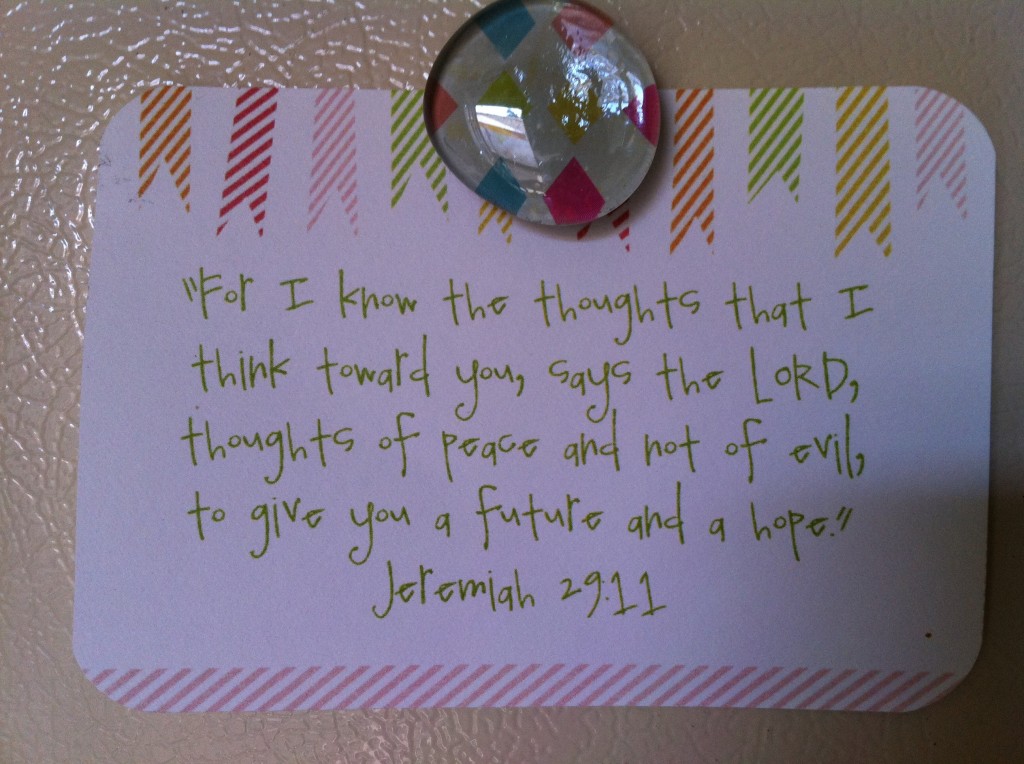 I felt kinda silly when I first printed it out, since it’s one of those verses that everyone quotes in every circumstance.  But today God really gave me comfort through this verse.  I spend so much time trying to figure out what God’s thoughts are toward me, but in reality, I don’t need to know what they are, because I already know that they are good.

This entry was posted on Friday, September 23rd, 2011 at 8:35 pm and posted in Uncategorized. You can follow any responses to this entry through the RSS 2.0 feed.
« Chicken Little on the way!
1st Anniversary and Birthday Part One »

2 Responses to “A future and a hope.”